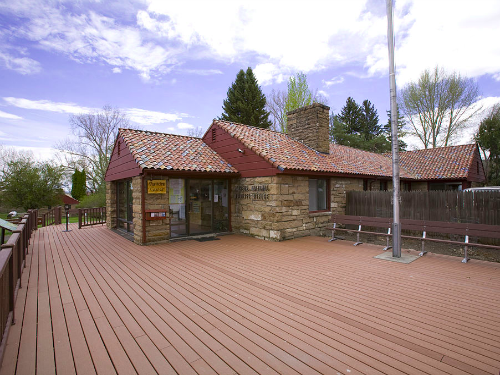 Ever since armed militiamen took over a federal building in the Malheur National Wildlife Refuge, the one question that has been on everyone’s mind is “how are the Feds going to respond to this?” Regardless of whether or not you support these people, you have to admit that the government’s response hasn’t been typical.

At least for now, there isn’t an army of soldiers, or swat teams, or tanks, bearing down on the militia’s position. As far as we know the FBI is en route, and that’s pretty much it. From the accounts that have been coming out of the area, it doesn’t look like a Waco situation. It doesn’t look like a Bundy Ranch situation either.

Granted, this could still get really ugly at any time, but based on what government officials have said, it doesn’t sound like they want that. While its hard to say what they are thinking behind the scenes, publicly they are calling for a peaceful resolution to the situation. Even the White House chimed in, referring to the standoff as a “local law enforcement matter” and refusing to label the militiamen “terrorists,” before calling for a peaceful resolution.

I don’t know if they really mean that, but it means something. Just as the militiamen have claimed that they won’t shoot unless fired upon first, the government may be trying to play the same card. Perhaps they are trying to makes themselves look peaceful and rational, before sending in a provocateur to escalate the situation in their favor, but who knows? It’s just as likely that they genuinely don’t want a civil war on their hands. If they did, they would have burned the Bundy Ranch to the ground back in 2014.

Honestly, I think they learned their lesson after Waco and Ruby Ridge. As much as our authoritarian government would love to shoot and burn every American that challenges them, they know it only makes things worse. In the long run, those incidents only served to catalyze the growing militia movement at the time, and they still inspire fear in our government to this day. Granted, the government wants you to be afraid, but it has to be the right kind of fear. They want you hiding under your bed. The last thing they want, is for everyone to grab a rifle and start organizing with like-minded people.

And that’s precisely why they backed down from the Bundy Ranch. They knew that in the public’s eyes, they did not have the moral high ground. They knew that if they fired upon those ranchers and militiamen, it would only foment more resistance around the country.

That doesn’t mean they don’t want some kind of revolution or civil war in the near future. If they ever want to really lock this country down and suppress all resistance in the population, that would be the perfect excuse. However, it’s hard to say if they want that war to occur right now. They need to be sure that all of their ducks are in a row before they spark that kind of conflict, and I don’t think they are.

Which brings us back to the standoff in Oregon. In the long run, what is our government going to do about this? Are they going to sit back and try to wait out the militia? Are they going to negotiate with them? Will they use a provocateur to inspire violence in the militiamen, or will they just steam roll through them with APC’s and soldiers?

While it’s likely that the government doesn’t want a revolution (at the moment), they have also reached a moment of truth. They’ve come face to face with a crippling reality that every heavy-handed regime reaches at some point.

During the 90’s they learned that violent suppression only breeds more resistance. Now they’re beginning to learn what happens when they don’t respond with immediate violence. If they let these people get away with this, even for a little while, what message are they sending to the American population? That if you show up with guns to a government building, the government will just roll over and play ball? That too, also breeds more resistance. The population realizes that the government is too chicken to fight them, and they’ll start to take back their country.

So there’s really only two courses of action that the government can take, if they want to maintain their long-term existence. They can find a peaceful resolution that leaves them looking authoritative. Or, they can find a way to oust these men by force in a way that makes them look like the good guys (i.e. with a false flag of some kind). If the militiamen don’t leave on their own accord within the coming days or weeks, we’ll soon see what the government is really capable of, and their long-term intentions will be crystal clear.

Delivered by The Daily Sheeple

We encourage you to share and republish our reports, analyses, breaking news and videos (Click for details).

Contributed by Joshua Krause of The Daily Sheeple.

Joshua Krause is a reporter, writer and researcher at The Daily Sheeple. He was born and raised in the Bay Area and is a freelance writer and author. You can follow Joshua’s reports at Facebook or on his personal Twitter. Joshua’s website is Strange Danger .

Wake The Flock Up! Please Share With Sheeple Far & Wide: