May 6, 2015 (Valery Kulikov  – NEO) – The recent scandal involving the sexual abuse of African children carried out by members of a UN peacekeeping mission, despite numerous efforts of this international organization to play it down, will not be ignored. And the international community must finally recall what was the original purpose of the UN as established by allied powers after the Second World War in the name of peace and security for all people on the planet. 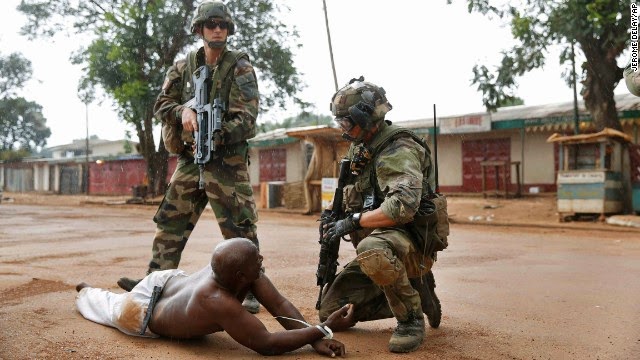 According to a series of publications by Bruxelles2, France Info, Guardian and a number of other media outlets, a number of French and Georgian soldiers that were employed in the UN peacekeeping operation “Sangaris” in Central Africa, are responsible of child sexual abuse.

It should be recalled that an armed conflict between the government of the Central African Republic and Muslim rebels, many of which took part in the civil war of 2004-2007, resulted in the French Defense Minister Jean-Yves Le Drian announcing that France would deploy a thousand soldiers in CAR to carry out a UN peacekeeping mission. On December 9, 2013 the United States decided to take part in this operation, while the Georgian parliament also agreed to send its soldiers to CAR a year later, on February 22, 2014. By June 2014 the number of Georgian Armed Forces in the Central African Republic reached 140 members.

According to the French news agency France Info, French and Georgian soldiers were raping children aged 8 to 15 years in the area near M’Poko airport and were subjecting them to sexual exploitation.

Some of the incidents that occurred between December 2013 and June 2014 in a refugee camp at M’Poko airport were depicted in a special UN closed report that was titled “Sexual Abuse on Children by International Armed Forces.” In particular, the document contains witnesses of local boys that were subjected to sexual exploitation, including rape and homosexual relations in exchange for food and water. The majority of the victims were orphans, increasing their vulnerability. In the summer of 2014 this report was handed over to the office of the UN High Commissioner for Human Rights in Geneva, however no action was taken to investigate the factual findings.

In these circumstances and in order to stop systematic child rape in CAR, one of the staff members of the Geneva Branch of the United Nations Anders Kompass had given those documents to French authorities on his on initiative, in hopes that they would take effective measures to investigate the described incidents and punish those responsible. However, the highest ranks of the United Nations didn’t seem willing to “wash their dirty linen in public”, instead they are now planning to sack the “snitch” for an “unauthorized disclosure of proprietary information.”

In this regard, one must note that in the past the United Nations has been caught trying to conceal incidents of pedophilia numerous times, including sexual exploitation of children in the Democratic Republic of Congo, Kosovo and Bosnia, along with concealing incidents involving sexual harassment in Haiti, Burundi and Liberia.

Recently, some serious accusations against the UN were made by James Wasserstrom, a former US diplomat that was fired from the UN once he expressed his suspicions about the corruption among senior officials of the former UN mission in Kosovo. In particular, this former diplomat stressed the fact that instead of punishing Anders Kompass, this international organization must have taken all possible measures to prevent such abuse in the future, along with punishing all responsible figures in a timely manner. A responsible official of the Swedish Foreign Ministry Anders Ronquist, has also raised his voice in the defense of Anders Kompass, stating that those incidents must never again occur in the future. There’s little doubt that those crimes along with the UN’s attempts to hide them do not erode the credibility of this international organization.

But the fact is that this credibility has already been jeopardized by numerous cases of unjustified use of force initiated by certain UN members to achieve their own geopolitical goals. Once the UN became a political servant of Washington, it has started serving US military contractors that hungry for even more bloodshed all across the globe. This policy has already led to the death and suffering of hundreds of thousands of civilians in Afghanistan, Iraq, Libya, Syria and other countries of the Middle East, along with Africa and the former Yugoslavia.

If there’s going to be no change in the policies and actions of the United Nations officials now, it is possible that this organization may suffer the sorry fate of its predecessor – the League of Nations, that was just as unable to prevent conflicts and global threats to humanity on the basis of respect to international laws.