Trump Surrounded By Bankers, Wall St. Insiders Banging on the Door to Get In: “Draining the Swamp?” 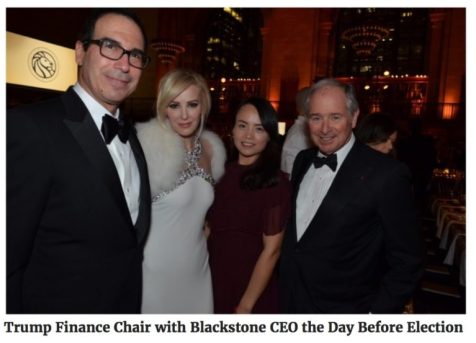 This article was written by Michael Krieger of Liberty Blitzkrieg.com.

Editor’s Comment: If Jamie Dimon (of JP Morgan Chase) or anyone else that heads a Wall Street mega-bank, etc. does become Treasury Secretary – and that’s a big if for now, as reports on Jamie Dimon remain unconfirmed – then it will be the clearest signal yet that this latest round of “change” will be more of the same once again. If this proves true, then Trump becomes Obama-in-2008 faster than a sportscar goes from 0-to-60.

Once again, we see the worst and most dangerous elite insiders looking for yet another bailout in the form of jobs, appointment and power over the levers of government policies – climbing back onto the government lifeboat (now in the Trump administration) while working to swamp the rest of the struggling passengers who were on-board the U.S.S. Titanicamerica. A new Captain still can’t stop this trainwreck, even if any change is welcome. A real #drainingtheswamp would be a great start, but early signs cast doubt on that happening.

This was the exact rationale for “The Obama Deception” exposé at the start of Obama’s first term – it’s a deception because it’s a brand new face frontin’ for the same ol’ gang – and people are slow to catch on, and even less willing to admit they got conned. Is Trump the new Obama for the alt right/populist uprising to keep them complacent and blow off enough steam to avert a destabilizing revolution? Does America have time to be wrong all over again? It is our duty to stay focused on these individuals and pressure Trump to dump or block the worst of these appointments.

Before we move forward, let’s start with the following extraordinarily disturbing report out of CNBC:

In the wake of Donald Trump’s upset victory, advisors to the president-elect have floated the possibility of naming JPMorgan Chase chief Jamie Dimon Treasury secretary, according to two people familiar with the matter, but one of them added that Dimon said he would not be interested in the role.

A Trump spokesperson could not immediately be reached for comment, and a spokesman for Dimon declined to elaborate beyond his past remarks that he would not be interested in the job.

First off, I want to say that the above isn’t confirmed. If it’s totally false, the Trump campaign should come out with a quick and vehement denial. I sincerely hope that happens.

That said, the report is cause for serious concern. Why? Because Trump’s reluctance to go after Wall Street was apparent throughout his entire campaign (as opposed to Bernie Sanders), and it was one of the main reasons I could never get comfortable with him. I wrote several posts where I articulated my concerns, but here’s an excerpt from one of them, Donald Trump’s True Colors Emerge as He Snuggles up to Wall Street:

While I’m not a Dodd-Frank fan, it’s not because it was too harsh, but because it didn’t really do much of anything. It was the typical neoliberal bait and switch, designed to look tough for public consumption, while merely making tweaks around the edges of a financial system that requires systemic, paradigm level change.

Trump’s support of repealing Dodd-Frank tells you all you need to know. A Trump Presidency will see Wall Street felons who should be in prison, running as wild and free as ever.

He will be the same thing to distressed working class whites that Obama was to the black community. A fake messiah and a shyster.

Read that last line over and over again until you understand it. If it is true that Trump considered the CEO of the largest “Too Big To Fail” and “Too Big to Jail” U.S. bank for Treasury Secretary, we can be pretty much assured that Donald Trump is the Republican version of Barack Obama. A fraud who talked a good game in order to get elected, but who will be a willing pawn of crony corporations and Wall Street. You can’t drain the swamp by surrounding yourself with the swamp.

If I don’t hear a denial about this rumor, I will assume it’s true, which means Trump and I are off to a very bad start. Whether Dimon takes the role or not (I doubt it), is irrelevant. Merely considering Dimon tells you all you need to know about the types of status quo people who are likely to surround President Trump.

As I warned in yesterday’s post, Americans Roll the Dice With President Donald Trump,

Trump will be a failure unless he brings the right people into his inner circle. This is of the utmost importance. Indeed, I knew for certain Obama was a total fraud the moment he appointed Larry Summers and Timothy Geithner to key positions within his administration. This is the area I think Trump is most vulnerable to making some very big mistakes. Indeed, I was very bothered by the effusive compliments he showered upon one of the nation’s worst political figures, Chris Christie, during this victory speech.

If Trump really wants to shake things up, he needs to think outside of the box and look far beyond the Chris Christies of the world, and consider some very sharp people he’s never heard of. If he surrounds himself with the old, tired political characters we already know, I fear very little will change for the better.

You can’t get more inside the box, status quo than Jamie Dimon. Period. Which brings me to a conspiracy theory about the whole thing. I think there’s a remote possibility that the Trump campaign leaked this themselves with the hope that he can then appoint his preferred candidate, former Goldman Sachs partner, Steve Mnuchin, with little outrage. That’s typical Donald Trump behavior. People will then say, “well at least it’s not Jamie Dimon.” Unfortunately, Steve Mnuchin would be a terrible choice too. As we learned in the post, A Nation of Sheep, Afraid of Words:

Mnuchin’s presence in the campaign reveals how the qualities Trump loyalists projected on their hero don’t measure up to the truth. They have venerated him throughout the Republican primary for rejecting the dirty business of pay-to-play politics, and for populist vows to protect the ordinary worker. But in selecting Mnuchin, not only has Trump submitted to the realities of presidential campaign finance; he’s chosen one of the most notorious bankers in America to carry it out.

When I heard Mnuchin’s name last week, I immediately remembered the front lawn of his mansion. Back in 2011, local housing activists and the Occupy movement in Los Angeles camped out on that lawn to save the home of Rose Mary Gudiel, a La Puente, California, resident who faced eviction after being just two weeks late on one mortgage payment. The activists threatened to move all of Gudiel’s furniture into Mnuchin’s $26 million Bel Air estate if the eviction wasn’t stopped. Twenty police officers and a helicopter met the protesters.

The OneWest subsidiary Financial Freedom executed 39 percent of all foreclosures on reverse mortgages between 2009 and 2015, despite servicing only 17 percent of the market, according to data from the Department of Housing and Urban Development (HUD) obtained by the California Reinvestment Coalition. OneWest disclosed in its most recent annual report that it’s under investigation for this disproportionate share of “widow foreclosures” by HUD’s Inspector General. The victims include 103 year-old Myrtle Lewis of North Texas, who OneWest put into foreclosure after her insurance coverage lapsed; Karen Hunziker, who got a foreclosure notice from OneWest ten days after her husband passed away in 2014; and a host of others.

Trump’s loyal fans aren’t likely to scrutinize Mnuchin’s record, but they should. You can measure political candidates in part by who they associate with. The foreclosure history in Mnuchin’s past reflects an extreme mentality of profit at all costs, and hardly a viewpoint of standing up for the little guy. Trump as populist was always something of a pose, covering for a deep nationalism and antipathy to immigrants. The Mnuchin pick just brings that into sharper relief.

Meanwhile, what was Mnuchin doing right before the election? Why he was the personal guest of Blackstone head Steve Schwarzman at the New York Public Library’s Lions gala.

The setting was the New York Public Library’s Library Lions gala, where the Rose Main Reading Room’s tables were covered in gold cloth, the place mats were made of gold paper laser-cut to resemble the rosettes on the room’s ceiling, and the books were lit with spotlights.

Mnuchin was Schwarzman’s guest — an experience sort of like hanging with Donald Trump in Trump Tower: The gala took place in the library’s Stephen A. Schwarzman Building. The New York Public Library includes this flagship center for collections and exhibitions, as well as more than 80 branch libraries where children learn to read, teens do homework and job-seekers work on their resumes. 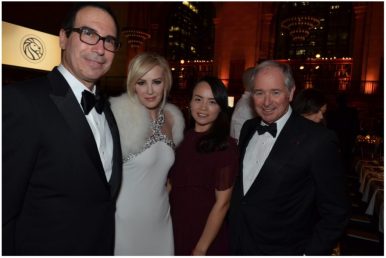 Steve Schwarzman…you know that name don’t you? Of course you do. He’s the guy that said the following about the threat to repeal the carried interest loophole:

Word of mouth says that Blackstone founder Steve Schwarzman got suddenly very passionate when talking about tax hikes in July.

With that in mind, it’s no surprise that Schwarzman had the following to say in Davos earlier this year. From the post, Billionaire CEO of Blackstone Trolls the American Public – He Doesn’t Get Why People Are Angry:

This is the guy Trump’s finance chair was hanging with a day before the election. You don’t get more status quo than Steve Schwarzman. While we’re at it, here are just a few examples of what Blackstone’s been up to since the financial crisis:

Meanwhile, I think the performance of Wall Street shares since the election tells you all you need to know. 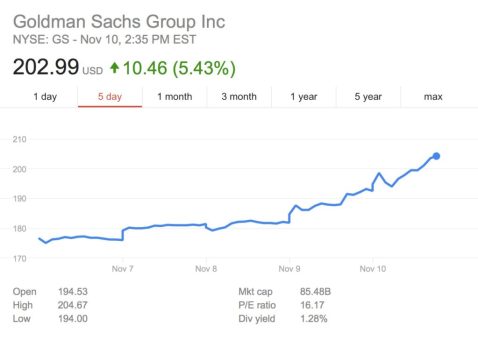 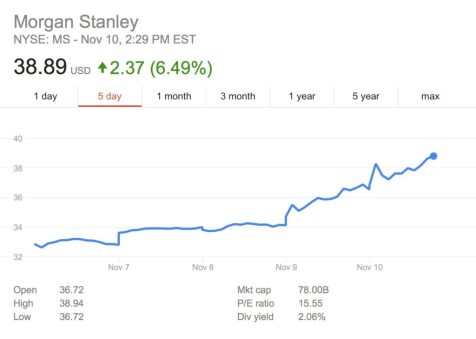 To conclude, this article is primarily written for all my readers who are either Trump supporters, or who reluctantly voted for him. My message to you is that we need to hold this man’s feet to the fire. The election is over, and you got your desired outcome. Now is not the time to be a cheerleader. Now is not the time to behave exactly like Obama zombies did after he became an obvious betrayal. What allowed Obama to do all the bad things he did, was the fact that his supporters made endless excuses for him. Don’t make excuses for Trump. If you do, your life will get a lot worse and this country will decay far more into an authoritarian oligarchy than it already has. It is up to you to make sure he doesn’t become the Wall Street puppet I always feared he would be. 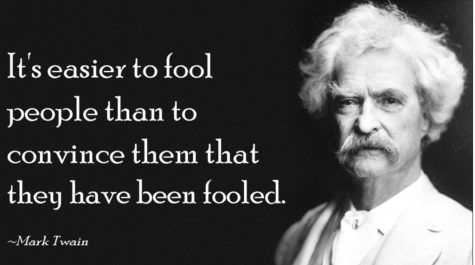 This article was written by Michael Krieger of Liberty Blitzkrieg.com. His columns typify the kind of questions that must be asked during the next administration, no matter if you support or oppose it.

Trump Surrounded By Bankers, Wall St. Insiders Banging on the Door to Get In: “Draining the Swamp?”.