Yesterday we learned that for more than one year the FBI’s White Collar Crime Division have actually been investigating a pay-for-play activity between Hillary Clinton and the Clinton Foundation has been going on for more than a year. According FOX anchor Bret Baier, multiple FBI source said, ‘indictments are likely.’

This could get very interesting…

A number of new revelations could really raise the temperature on this scandal:

Last night, an RT Exclusive revealed what Julian Assange described as, “the most significant email in the whole collection.”

WikiLeaks highlighted an early 2014 email where outgoing Secretary of State Hillary Clinton is urging John Podesta, then an advisor to President Barack Obama, to “bring pressure” on Qatar and Saudi Arabia, “which are providing clandestine financial and logistic support to ISIL [Islamic State, IS, ISIS] and other radical Sunni groups.” 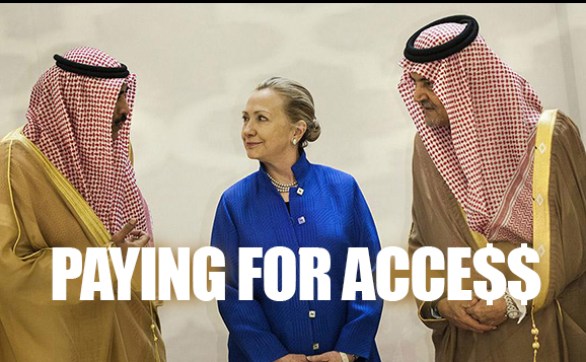 Yes. You read that correctly: the Clinton Foundation was accepting millions of dollars in donations from the very Gulf states she knew were funding ISIS and Al Nusra terrorists – thus exposing the charade the Clinton and the Obama Administration have been playing ever since the ‘ISIS crisis’ began in June 2014.

Fox News Channel’s Bret Baier reported on the latest details of the Clinton Foundation investigation from two sources inside the FBI. He reveals five important new pieces of information in these two short clips:

1. The Clinton Foundation investigation is far more expansive than anybody has reported so far and has been going on for more than a year.

2. The laptops of Clinton aides Cherryl Mills and Heather Samuelson have not been destroyed, and agents are currently combing through them. The investigation has interviewed several people twice, and plans to interview some for a third time.

3. Agents have found emails believed to have originated on Hillary Clinton’s secret server on Anthony Weiner’s laptop. They say the emails are not duplicates and could potentially be classified in nature.

4. Sources within the FBI have told Baier that an indictment is “likely” in the case of pay-for-play at the Clinton Foundation, “barring some obstruction in some way” from the Justice Department.

5. FBI sources say with 99% accuracy that Hillary Clinton’s server has been hacked by at least five foreign intelligence agencies, and that information have been taken from it.

(Source: Real Clear Politics)
.
However, other leading commentators are skeptical about this latest stage play by FBI Director James Comey and the FBI. Listen to nationally syndicated radio host Rush Limbaugh’s intriguing explanation here:
.
Conclusion: Limbaugh took his postion many days ago, and based on the potential gravity of Assange’s recent Clinton-ISIS email revelation – this looks to be a compelling smoking gun. Therefore, Limbaugh looks to be stunningly accurate in his assessment.